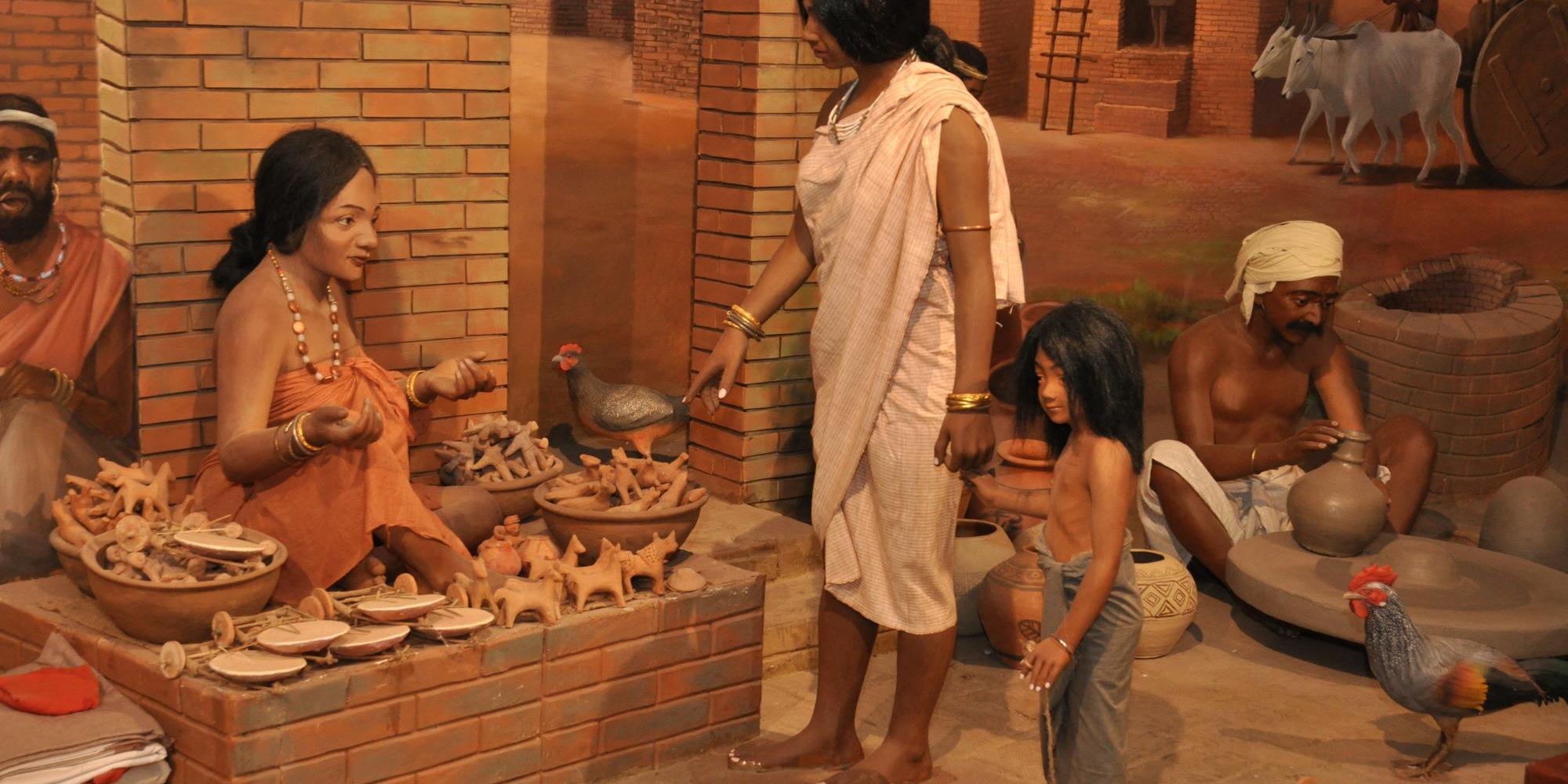 Wednesday, March 6th – National Council of Science Museums (NCSM), an organization under the Ministry of Culture, Govt. of India has collaborated with Google Arts & Culture for Once Upon a Try – the largest online exhibition about inventions and discoveries ever curated. The online exhibition was launched today and contains collections, stories and knowledge from over 110 renowned institutions from across 23 countries, highlighting millennia of major breakthroughs and the great minds behind them. 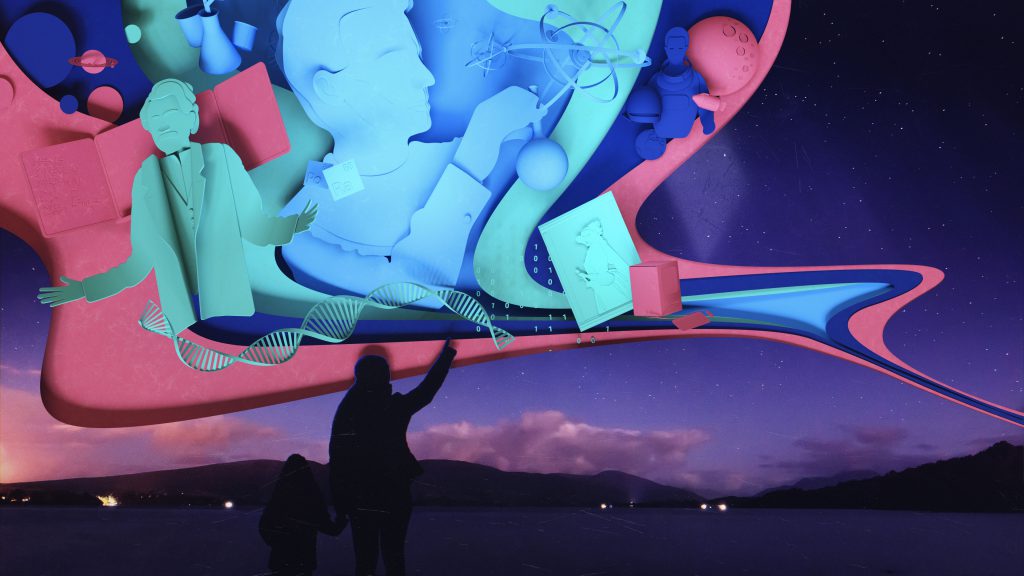 Everybody can now explore more than 400 interactive exhibitions that pay tribute to humanity’s greatest leaps in science and technology, and the visionaries that shaped our world, as well as tales of epic fails and happy accidents.

National Council of Science Museums contributes six interactive stories that share some key insights into the long and glorious Science and Technology Heritage of India. India’s historical contributions to the field are considerable but not well known. The following six sections of the exhibition are key examples

1. Historic Beginnings: The Indus Valley Civilization – By the middle of the 3rd millennium BCE, we see a fairly developed urban culture emerged along the Indus and Saraswati rivers in the North West India.  The Indus Valley Civilization has a distinct set of features not seen anywhere else in the ancient world. The section is a tribute to the development of human wisdom of technology in the early part of world history. This interactive exhibit explores various facets of the first Urban Civilization – like Town Planning (including sewerage and drainage), standardization of bricks, food security through granaries, cotton and textiles, metallurgical practices, ceramics, pottery, artistically elegant personal ornaments, agriculture, shipping and navigation. 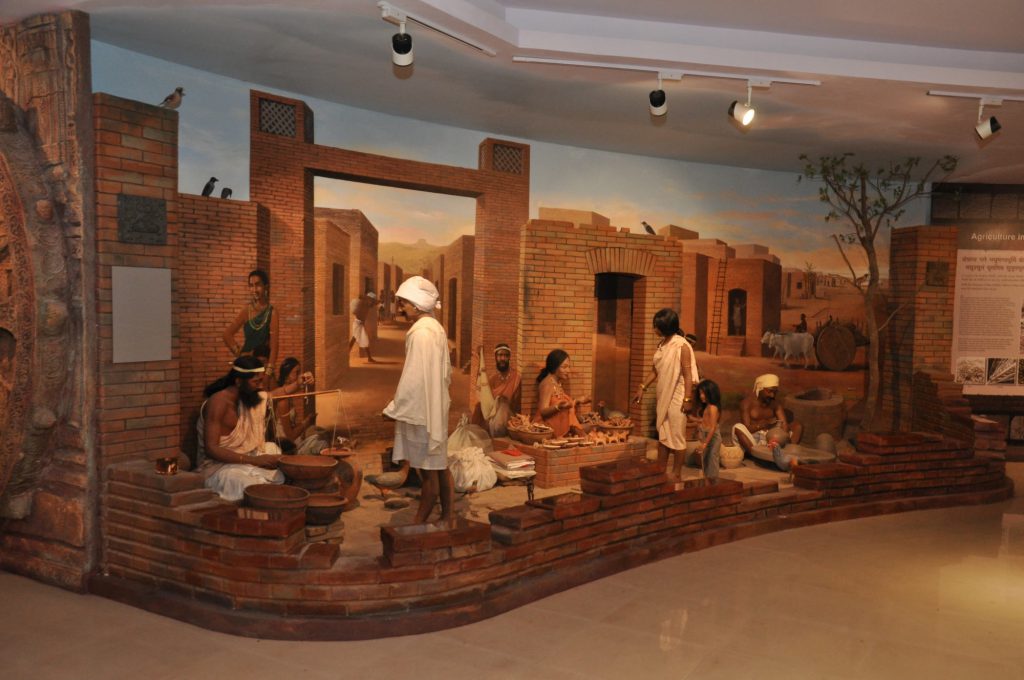 2. Ayurveda: Indian Contributions to Medicine – This interactive exhibit explores the science of the body and mind, which in India had its origin in the healing arts of the Vedic times. This knowledge and practice, called Ayurveda, emerged as a holistic medical science par excellence by about the fifth century BC. The two great classics of Ayurveda, the Caraka (ca. 2nd AD) and Susruta Samhita (ca. 4th AD), present a vivid and cogent account of medical knowledge and surgical practices respectively in vogue about 1800 years ago and continue to be used in Ayurveda today. 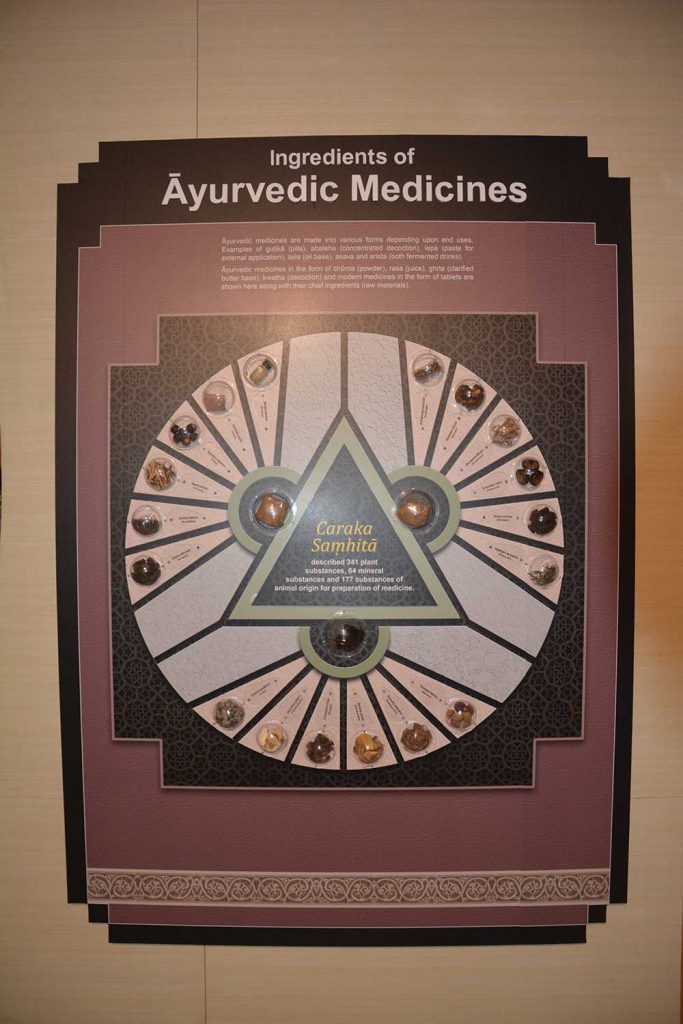 3. Susruta Samhita: Ancient Indian Surgical Knowledge – This interactive exhibit explores the Susruta Samhita, which accords pride of place to surgery. It describes more than 300 hundred different operations, like outstanding feats of ancient Indian surgery related to laparotomy, lithotomy and plastic operations, and 121 surgical instruments (20 sharp kinds and 101 accessories) such as tongs, forceps, scalpels, catheters, syringes, speculums, needles, saws, probes, scissors and the like. The. The Susruta Samhita is regarded as the earliest document to give a detailed account of rhinoplasty (plastic reconstruction of the nose), whereas, it was not before the eighteenth century that plastic surgery made an appearance in Europe. 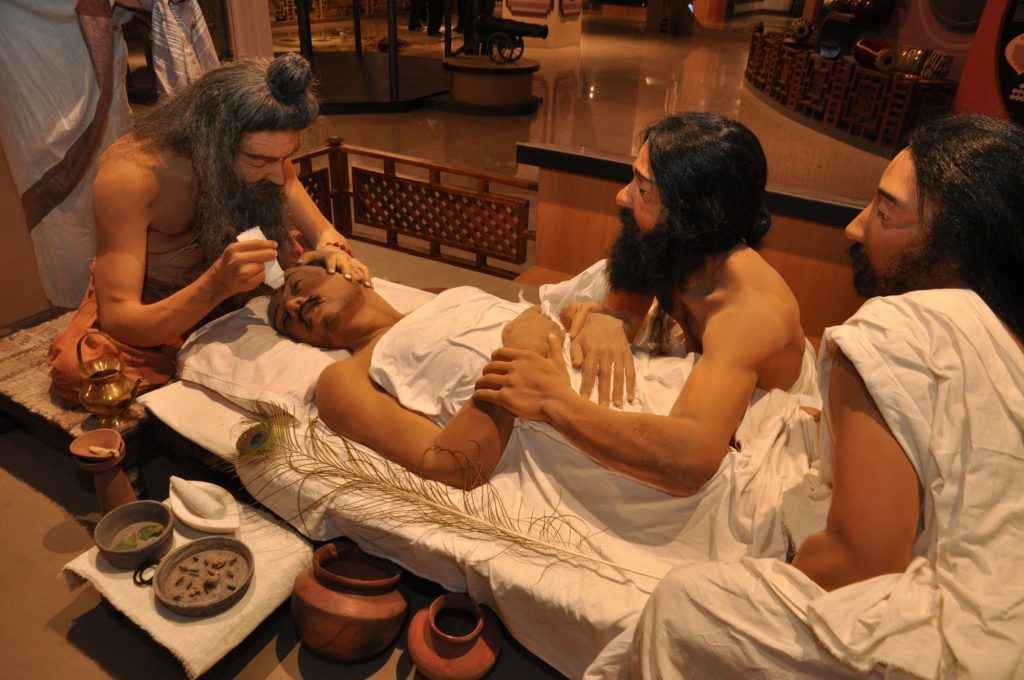 4. Rasashala: Ancient Indian Alchemical Lab – The section depicts the ancient Indians’ contributions to the science of alchemy (the older form of chemistry) highlighting the usage of a variety of yantras (instruments) for producing mercury and other chemical compounds.

5. Itr: Ancient Indian Knowledge of Perfumery – Ancient Indians achieved great technical understanding and technological progress in perfumery, due to considerable use of cosmetics and perfumery for the purpose of worship, sale and sensual enjoyment. Brahatsamhita (500 AD) of Varahamihira deals with ‘gandhayukti’ (blending of perfumes) in 37 verses. The word ‘sugandhi’, meaning well perfumed, is also used in Rig Veda. Expressions involving the term ‘gandha’ are found in Taitriya Samhita, Maitrayani Samhita, Satapata Brahman and Taitriya Aranyaka. The ancient traditional method of making itr using hydro distillation is still used at Kannauj, which is acclaimed by the world both as perfumes and as medicines.

6. Musical Instruments from the Indian Subcontinent – From ancient times, Indian musicians have developed and performed with traditional and indigenous musical instruments that suited their style. Indians played on a variety of string instruments, wind instruments and percussion instruments since antiquity. Apart from the understanding of acoustics necessary for the fabrication of these instruments, Indians also excelled in selecting appropriate materials for the main body and preparation of the alloys or processing of membranes to be suitably used in these instruments. 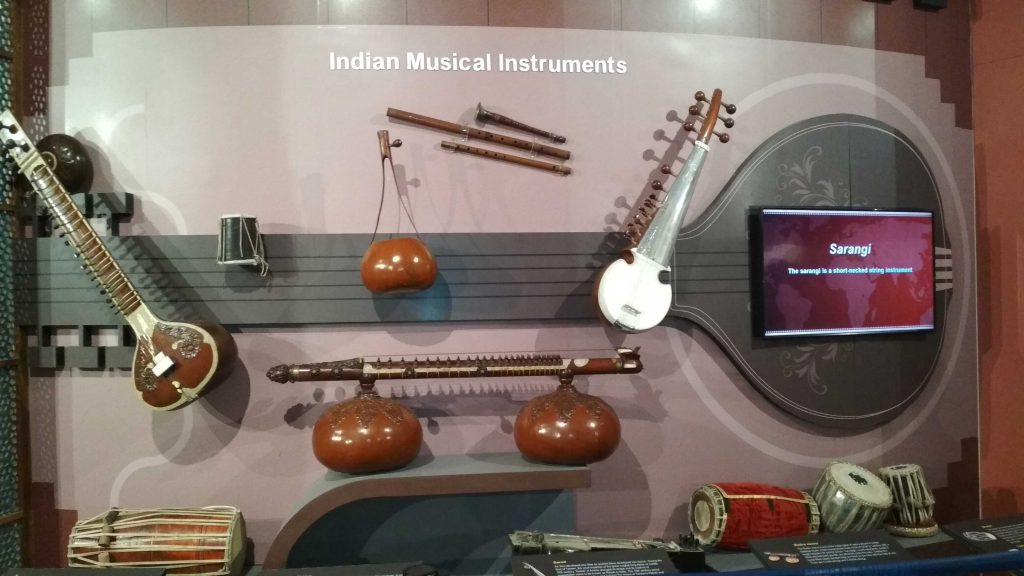 Beyond these narratives, Museum views of the National Science Centre, Delhi and Science City, Kolkata, both units of NCSM, are available for national and global audiences to virtually walk through.

The treasure which was lesser known to the world is now open to all. Explore National Council of Science Museums on Google Arts & Culture at: https://artsandculture.google.com/partner/national-council-of-science-museums

Shri A.D. Choudhury, Director General, National Council of Science Museums said: “Modern technology has opened avenues for global audiences. Museums are no more limited to the boundaries of four walls. Google Arts & Culture provides a platform to showcase exhibitions through all-new experiences via high resolution images and virtual walkthroughs.  Our collaboration starts with India’s Science and Technology Heritage exhibition, an area lesser-known to the world. I hope people from across the world will be enriched through this initiative, and would be motivated to visit our real-world expositions at our Science Centres throughout the country.”

“We invite everyone to participate in the first phase of an online collection that celebrates innovation and science. Through inspiring, and at times surprising, stories from over 100 partners, you can explore the inventions and discoveries that have shaped our world. Once Upon a Try is all about that first attempt, the idea, the journey of fulfilling a dream, and we hope it’ll give people that extra boost to find their very own eureka moment,” said Amit Sood, director of Google Arts & Culture.

Explore Once Upon a Try on Google Arts & Culture (g.co/onceuponatry) or using the app on iOS or Android, and join the conversation with #onceuponatry.

Google Arts & Culture puts the collections of more than 1,800 museums at your fingertips. It’s an immersive way to explore art, history and the wonders of the world, from Van Gogh’s bedroom paintings to the women’s rights movement and the Taj Mahal.  The Google Arts & Culture app is free and available online for iOS and Android.  Our team has been an innovation partner for cultural institutions since 2011. We develop technologies that help preserve and share culture and allow curators to create engaging exhibitions online and offline, inside museums. Read about our latest projects on the Google Keyword blog.

National Council of Science Museums (NCSM), a premiere institution in the field of science communication, is an autonomous organization under the Ministry of Culture, Govt. of India.  Primarily engaged in popularizing Science and Technology through a network of science centres, Mobile Science Exhibitions (MSE) units that visit rural schools and plethora of activities for public and students in particular, NCSM has now become a trend setter in the field of science communication both at national and international level. Presently NCSM, with its Headquarters in Kolkata, administers and manages 25 science museums/centres spread across the country and is the world’s largest network of science centres and museums that functions under a single administrative umbrella with an annual reach to about 15 million people. Innovation Hubs set up by NCSM, provide expert guidance and professional lab equipment facilities to young students to nurture creativity, innovation and engagement in science. 33 hubs are functional in science centres across the country reaching about 1,50,000 students annually through each hubs and 18 more are in making. www.ncsm.gov.in