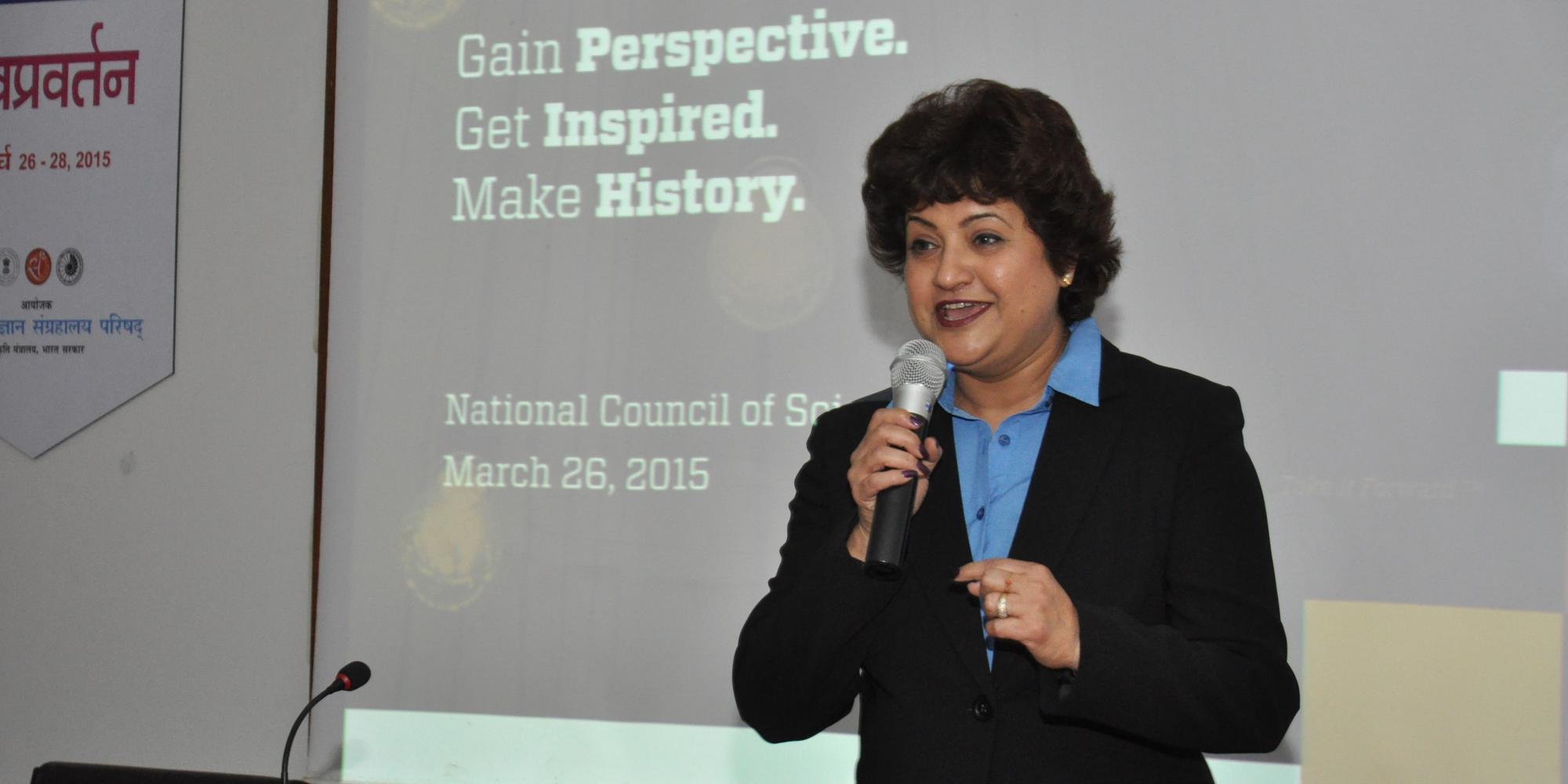 An International Capacity Building Workshop on ‘Innovation’ was organised by National Council of Science Museums (NCSM) from 26th – 28th March 2015 in Kolkata. As NCSM is developing 60 Innovation Hubs throughout India, this workshop was very much evitable for enhancement of skills of the coordinators of Innovation Hubs in India by exposing them to best practices adopted in similar institutions in the world.

Shri G. S. Rautela, DG, NCSM inaugurated the Workshop on 26th March in presence of Ms. Paula Gangopdhyay, Chief Learning Officer (CLO), The Henry Ford, USA who was one of the presenter during the workshop. President Barack Obama appointed Gangopadhyay as a member of the National Board of Museums and Libraries. She is the recipient of the prestigious 2014 Faraday Science Communicator Award.

Speaking on the occasion Shri Rautela emphasized on grass root innovations citing several examples from the innovator who participated in the Innovation Festivals organised by NCSM in Guwahati, Bengaluru and Mumbai.

Ms. Gangopadhyay gave presentation on ‘The Power of Collaboration and Innovation in the 21st Century’ and on ‘Can you teach Innovation? Yes You can’ and tried to explain it through several hands on activities like making a structure from plastic glass and rubber band without touching the glasses from Hand. She also discussed about the traits of an innovator and Keys to Innovation and Creativity.

Dr Dipayan Dey, Director, SAFE (South Asian Forum for Environment) gave his presentation on ‘The nature of Creativity and Creative Processes’ in which he discussed transformation from ‘Idiocy to Ideas’.

Dr N S Dinesh, Professor, IISc, Bangalore discussed about innovations done by him and his team to solve many real life problems of various fields. In his presentation on ‘Challenges in Building cross-disciplinary engineering products’ he discussed about Clubfoot Brace, Animal Tracker, Bee Log, Camera Trap for Wildlife and use of robotics in  art and culture. He presented a video of his automated puppets which he named ‘Yantrananda’ and ‘Yantramaya’. His presentation was applauded by everyone as it showed how Indian Innovation can solve many problems and revive lost art forms in a cost effective way.

Dr Tinku Acharya, Founder & MD, Videonetics, a fellow of IEEE, a researcher, inventor of 150+ Patents, and recipient of several prestigious Awards like Most prolific Inventor in Intel, Engineer of the Year, discussed about importance of ‘IPRs and Its relevance in India’ by citing examples like patenting of Basmati by US in spite of the fact it is grown by Indian farmers for a long time.

Apart from that, coordinators of five Indian Innovation Hubs opened by NCSM, gave away presentation on the works carried out by them. After that Ms. Gangopadyay conducted some hands on session with participants and student members of the Innovation Hub of Birla Industrial and Technological Museum, Kolkata.

NCSM, an autonomous organisation under Ministry of Culture, Govt. of India is the largest network of Science Centres/Museums/Science City in the world. Under the Scheme SPICES (Scheme for Promoting Innovation, Creativity and Engagement in Science), NCSM is developing Innovation Hubs throughout India. Five Such Hubs have already been established in Kolkata, Delhi, Mumbai, Bengaluru and Guwahati. In total 60 hubs shall be developed during 12th plan period, of which work has been initiated for 21 such hubs. An Innovation Hub is place which provides facilities to nurture new ideas and help develop inquisitive perspective in youths of today. These hubs would involve youth in innovative and creative activities.