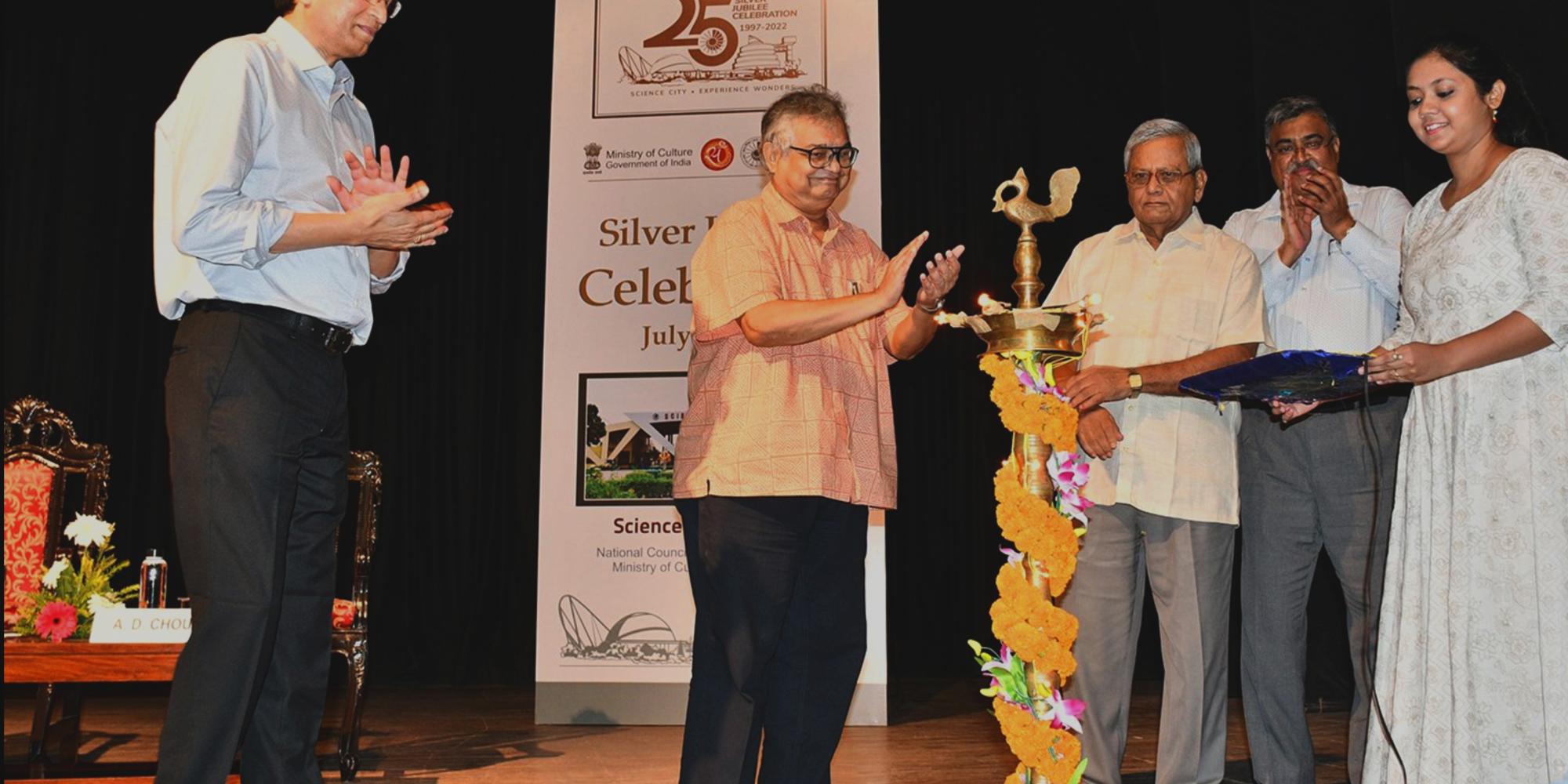 A full Dome film titled “Kolkata: The City of Joy”, an Exhibition titled “25 Years of Science City” and a giant Sun Dial were inaugurated.
Science City, Kolkata, a unit of the National Council of Science Museums (NCSM), Ministry of Culture, Govt. of India celebrated the Silver Jubilee of its foundation day on July 1, 2022 by organising various programmes and activities. Prof. Sibaji Raha, Former Director, BOSE Institute, Kolkata inaugurated the full Dome film titled “Kolkata: The City of Joy” in the Space theatre of Science City which is a first of its kind full dome digital theatre in India. The film portrays the brief history, monuments and cultural heritage of Kolkata besides portraying the unity in diversity of the city. The contrast of past and present Kolkata has also been shown in the film.

Later, he inaugurated an exhibition titled “25 years of Science City” which explores the journey of Science City from a garbage land to one of the top 15 science museums of the world as rated by the popular magazine Reader’s Digest. The exhibition consists of 30 panels and some architectural models on display. The exhibition will be on open for the visitors till 31st July, 2022.

A large-scale Sun-dial was inaugurated by Shri I. K. Mukherjee, former DG, NCSM in the Science Park of Science City, Kolkata. It is a horizontal sundial, with its gnomon pointing north and kept at an angle of 22.5 degrees, which is the latitude of Kolkata. The gnomon of this giant Sundial is 13 metres long. Apart from showing the local time, this Sundial will be an iconic sculpture at Science City. It beautifully connects the sun, the earth and the passage of time. The Sundial is made special by embedding the logo of ‘Azadi ka Amrit Mahotsav’, celebrating 75 years of India’s independence.

During the inaugural function Shri Arijit Dutta Choudhury, Director General, NCSM said: “It is a matter of immense pride that Science City, Kolkata, the first Science City of Indian sub-continent, has successfully completed 25 years in the service of the society. Over a period of 25 years, Science City has not only grown magnanimously in serving all the sections of the society by providing edutainment but it has also put forth a model for self–sustenance of museums and science centres. I am happy that such a Science Centre is managed by NCSM.”

Shri Anurag Kumar, Director, Science City, Kolkata acknowledged Mr. Sonam Wangchuk for launching the special logo of the Silver Jubilee Celebration of Science City on October 31, 2021 and elaborated on the future plans of Science City. He further said that “Science City Kolkata has been visited by over 3.3 crore visitors till date. Our visitors have made us, what we are today. To honour their sentiments, we are launching a yearlong Social Media Campaign titled ‘Memories of Science City’. The campaign gives the previous visitors of Science City an opportunity to share their memories either through a write-up or the visitors can record a video of their experience or send an old photo or video of their visit to Science City to us. Selected memories will be shared on the social media pages of Science City and NCSM. At the same time, every month 10 selected entries will be suitably rewarded along with a certificate of appreciation. This is our way of thanking our esteemed visitors.” A souvenir titled ’25 years of Science City’ was released on the occasion which was followed by a cultural programme.